Atlanta airport is a major hub not only for business travelers and tourists, but also for soldiers — many presumably on their way to or from hazardous military duties in Iraq. Lengthy lay-overs often protract their time in the airport, and so, looking up from the bright atrium of the main terminal, you can see them come to roost on the encircling balconies of the upper floors. There, distinctive in their desert camouflage fatigues, they sprawl against their matching duffel-bags.

Every so often, a large group of soldiers will muster and descend to the main floor, where they then proceed in single file towards their departing flight, often accompanied by one or two smiling sro volunteers who wave small American flags. This prompts a spontaneous round of patriotic applause on the part of nearly everyone in the atrium..

What exactly are you applauding? Are you simply signaling encouragement to these poor men and women, who may soon be in grave danger? If so, then, yes, clap. But could you also be clapping, against your wishes, for that tragic war itself? In which case, no, you decide to sit on your hands. But what about that particular private, who happens to have glanced your way — how will he read the message that you can’t help but send him, since invisibility is not an option here and the comparative complexity of your reflections can find no means of expression?

And so you bounce back and forth between yes and no, until suddenly you make up your mind one way or the other and do something — a unified act that betrays the divisions inside you.

If in that Atlanta predicament you can be said to be of two minds, then that represents the simplest of situations, that is, of divisions. Far more often, you’re of many minds, though you may sense these only vaguely.

Marvin Minsky looked at this in one of the quirkier texts in Society of Mind. He imagined your asking yourself whether you had enjoyed buying a present and wrapping it up for a friend. A task analysis of the activity would yield numerous sub-tasks, including such things as selecting the gift, choosing the paper, finding the ribbon, tying the bow, etc. He goes on to provide an admittedly pathological but hilariously crude diagram of what would happen if every sub-task reported its degree of satisfaction, with the final determination calculated by a series of votes.

As you can see, the process is as potentially corrupt as our representative democracy, at least from the point of view of the lower levels in the hierarchy.

But as Minsky points out all this complexity is largely suppressed — these internal divisions are shielded from you, and a good thing, too, since you’d be completely paralyzed should they rear their heads with every one of your thoughts and actions.

And yet there are times when you want to shake off this kind of suppression — a mental hygiene of sorts — and attend to the contradictory complexity inside you. A complexity that gnaws away at the very idea of you as singular self.

What has long fascinated me about The Society of Mind is that so many of its propositions — developed after all as part of Minsky’s life-long quest to develop artificial intelligence — can be verified by you the reader simply by thinking them through. In this respect, Minsky’s methods are nearly the same as those of William James a century or so earlier (in, for example, Principles of Psychology). Or to those of another hero of introspection, Paul Valery, whose daily pre-dawn reflections led to such insights as this:

If you set your microscope to the first magnifying-power, you get “Man is free.” If you step it up to the second, you get “Man is not free” — and then, maybe, it’s no longer Man that you are seeing.

But to return to Minsky, it seems that his approach to artificial intelligence — his attempt to base it on a deep understanding of human intelligence — has gone by the wayside. I’ll ask Marc, who knew Minsky at the Media Lab, to take this further. There’s a tragic side to this, having to do with both individual lives and institutional structures.

##marcel duchamp and the art of the one-liner

Questions that take the simplistic form of Do you like Wagner? once prompted Marvin Minsky to elaborate his notion of the mind’s technique of gerrymandering.

When asked a yes-or-no question, yes and no should be your only answer. Why reduce a whole complex of observations and judgments to a single word?

Just as foolish is to try summing up someone’s intelligence in an IQ number — a measure whose only use is in disproving the intelligence of those who administer or submit to it.

the long & short of it

Marc (sitting next to me) remembered the following witty exchange at the Media Lab:

I’ve often wondered whether Duchamp should be blamed for his many followers (a good question in general — should Christ?)

But the more specific and trickier question that I should have been asking myself is whether what I deplore in these followers I should also find and then deplore in the man himself.

What’s really at stake here is this: how, when, and why did the artwork-as-one-liner gain its dreadful currency?

No need to look far. A well-known early example is Duchamp’s goateed Mona Lisa with its schoolboyish pun of a title (She has a hot ass). This piece sticks in your mind for the same reason that an advertisement does — both have the same form: they’re designed to be taken in at a glance, but with a double-take at the slight transgression.

Duchamp’s titillating anti-art gesture set the pattern for much that followed, though he wasn’t the only culprit.

Far worse was Magritte with his Ceci n’est pas une pipe, which proliferated as far and wide as Duchamp — paving the way for all the forehead-slapping profundities of conceptual art. (Had we never known that a photo of a chair is not a chair?)

At length, yes. But yes only to those of Duchamp’s works that themselves demand long answers.

As it happens, it was Duchamp himself who made this point best in a note for the Large Glass: 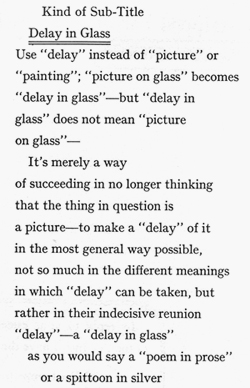 The idea of a deliberate delay in understanding goes in the opposite direction of the one-liner. As does his idea of his indecisive reunion of meanings, which leads to works that refuse simple resolution.

And so you have The Large Glass, a complex and peculiarly beautiful visual object, which is itself part of a larger network of meanings. These Duchamp made available to you in portable form — the Boite-en-valise and the Green Box.

You can’t grasp the whole without closely examining all the parts, which you must keep juxtaposing in a variety of possible relations — holding them up to the light, so to speak, again and again.

(Equally important is that Duchamp shows that you can’t rid an object of words — and better for the artist to supply them first than to wait for the curator or critic.)

And yet Duchamp (like Joyce) is willfully obscure, demanding more of you than he should — you have to delve into and decode an essentially private world. What a shame that he ended his career on this note of secrecy and obscurity with the Étant donnés.

He could have gone in a different direction, and fortunately someone else did so for him.

When Duchamp made his portable boxes and suitcases, they were still essentially hand-made — limited editions now set behind glass in museums where in fact they can’t be handled or read.

It was one of Duchamp’s followers, the English artist Richard Hamilton, who improved on the original. Hamilton published a perfect transcription/translation of the Green Box, not only helping to render the French text into English, but also setting Duchamp’s handwriting and hand-drawn diagrams into much more legible (and beautiful) form. Duchamp approved the result, but never followed its example.

What a shame that it’s Duchamp’s rather than Hamilton’s action that has remained the model in the art world, for obvious market reasons. You see this in Warhol (another Duchamp descendent) whose work flirts with the idea of factory-made reproducibility while stopping well short of it, for no other reason than the mercantile.

—And so to the original question of value, the indecisive answer answers best.