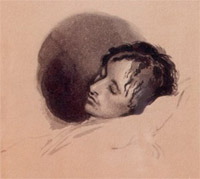 This indelible image of the poet dying young, with the suggestive black shadow cast by his unconscious head on the wall, is of John Keats on his deathbed in Rome, 1821. It was sketched by his friend Joseph Severn, who noted at the bottom that it was drawn to keep me awake — a deadly sweat was on him all this night.

Keats anticipated his death — writing at the time for his beloved, Fanny Brawn, perhaps, but surely also for the rest of us, his future readers:

This living hand, now warm and capable
Of earnest grasping, would, if it were cold
And in the icy silence of the tomb,
So haunt thy days and chill thy dreaming nights
That thou wouldst wish thine own heart dry of blood
So in my veins red life might stream again,
And thou be conscience-calm’d — see here it is —
I hold it towards you.

The haunting power of these words reaching from the grave is all the more intense for our knowing that Keats’s tuberculosis had already begun to cough his lungs out, killing him within two years.

Never married, Keats left no direct descendants. But he managed to impregnate the future a different way, with words.

When we read his work, however, we don’t quite bring him all the way back to life. And we reverse what he imagined. When we read as intently as we can, it’s his red life that starts streaming through our veins.

Leafing through the newspaper, I come upon the obituary pages and wonder how the photographs are chosen.

The current practice seems to be this: if the deceased lived well into old age, then the photographs of them are usually drawn not from the very end of their span, but close enough to reveal at least a hint of their advancing years. An exception is made if they have long since faded from public view — then they’re pictured as they were best known.

— Now if the dead had desires, I imagine they’d want their pictures to show them at the height of their powers or feeling.

And for the better souls among them, I’m convinced that these heights would be entirely different from the ones defined for us by flashbulbs.

For cultural if not genetic posterity, better a cut to black than a fade to it.

There’s no doubting that an early death can confer many advantages. Those brought down in their prime remain so much more vivid to us than those whose lives merely trailed away.

Oh, to duck both the compromises of the middle years and the irrelevancies of the declining ones! Only when our promise remains wide open do we stay so alive in others, so open-ended.

You can take the shape of your life into your own hands by ending it.

Which is not to say that suicide is usually a deliberate technique of cultural survival, though in certain cases it can be.

When Sylvia Plath stuck her head in the oven, it was no doubt anguish that drove her there, but dramatic and even exhibitionistic poems like Lady Lazurus looked forward to the act:

Dying Is an art, like everything else.
I do it exceptionally well.

And when Ray Johnson drowned himself in Sag Harbor, it was almost certainly the last move in his elaborately convoluted communications with the world — perhaps another in his Death series of artworks, which thoroughly mix up elements of art and of life.

In retrospect, his body of work, so close to being ephemeral, in fact becomes a kind of cultural coffin or reliquary — which works only if we his survivors care enough to collect, preserve, and decode it.

Fading away gives a more ambiguous and even compromised shape to a life.

At the end of the first of his volume of Coleridge’s life, with the second not to appear for another ten years, Richard Holmes paused to reflect on this interruption, which has the advantage, he wrote, that it

…does allow the reader to consider the position dramatically, as it were. Suppose Coleridge had indeed died, as he and his friends clearly expected he would, aged thirty-one, somewhere in the Mediterranean in 1804? …

To begin with, the whole “mythos” of his career would surely wear a quite different aspect. … He would be one of the Promethean figures, still moving upwards on the parabola of genius…

His literary achievement would have a sharp, bright clarity. It is is difficult to think that the shadows of failure, plagiarism, apostacy, or even opium addiction, would mark his reputation in any significant way.

The sad thing is that you can take any number of lives and see how much better they’d be — for us — had they ended at their peaks.

But I’m glad he didn’t imagine such a thing. Your life is not your artwork, and when you try to make it so, you achieve a kind of death-in-life that is the fate of those who try to make it so — living by rigid principles, setting themselves as static pictures for others to behold and bow down to.

In Jean Genet’s Prisoner of Love , I underlined his observation that someone’s death

I’ve kept turning this thought over in my mind, trying to make sense of it in light of my own experiences of mourning. As I’ve done so, a life has come back to me.

A young woman: a suicide.

She was my intern in a summer school classroom for learning disabled children.

Before meeting her I’d been told that she was a gifted but troubled college graduate, now seeking a meaningful new direction for her life (turning away from a long and intense training as a violinist). In my classroom, she proved to be perfectly diligent, though without the infectious enthusiasm with children that typifies natural-born teachers.

The last day of the session was a half-day, which culminated in a performance/show-and-tell/cupcake celebration of the class’s accomplishments. When it ended at noon, we all went our separate ways, free for the summer. Her way, I learned by phone that evening, was to go directly home and kill herself.

That news made me backtrack obsessively through the hours and days before. Somehow I wanted to pay her the attention that I now blamed myself for having given her only fleetingly. Certainly she came back to me with much greater force dead than alive, on one occasion uncannily so: a few days afterwards, I was walking on Connecticut Avenue when I happened to glance over at the passing blur of traffic, where for a moment I thought I saw her behind the wheel of a car. I had already started raising my hand to wave when I realized she was gone.

At her funeral I was surprised to find a reception line of the kind I’d encountered previously only at weddings and diplomatic functions. As I made my way down this line I expressed my sadness to the family members for their unexpected loss. Her father, who stood there radiating health, prosperity, and prominence, contradicted me sharply. Her suicide, he said, had been inevitable after so many previous attempts — She was never meant for this world, or words to that effect. When her siblings nodded in agreement, I turned away, numb.

Meanwhile, I’d forgotten about the snapshots we’d taken of the class celebration. When they came back from the photo processing store, they bluntly corrrected my mistaken memory. Where I had remembered a serious but composed, pale but pretty young woman, the photographs of her showed only a haggard and forlorn face, with the darkest imaginable circles under her downcast eyes.

How, I kept asking myself, could I have missed such telltale signs? At whom had I been looking?

What I really wanted to do then was to peer back into a more ordinary time for her and catch some of the unguarded and unweighted moments of her life — opening a window or putting on sandals or drinking a glass of water.

It’s the impending and then the actual absence of someone close to me that invests even the most everyday aspects of her being with such importance. I could even say that the longing for a departed lover is not unlike the act of mourning her, with the same sharpening of perception.

These ideas can lead in a less morbid direction when you consider your position in the wider world. Many lives are lost to you almost every day, and not by any tragedy, but merely in the mundane course of things — a rider on the subway, a cashier in a store, a child on a tricycle, a reader in a café, none of whom you are likely to see again.

If you focus your full attention on such people, their presences before you sharpen terrifically. You can put yourself in a kind of one-way touch with them in the same way as you do with other departed souls, equally present in their impending or actual absences.

This was the kind of devotion that Jack Kerouac at his best paid to others. In Visions of Cody, he finds himself in a cafeteria, watching the people around him, drawn in particular to a solitary girl whom he observes with a gentle loving kindness:

which to me implies that to observe things this freely means you have to let them go — a relinquishing rather than a possessing.