For your hand, it’s harder to draw a straight line than a crooked one. For your mind (and your computer), however, it’s the opposite — harder to draw crookedly than straight.

Such were the notes I jotted down after participating in a desultory panel discussion convened for the Immaterial Materials show at Pratt. A curator from the Whitney, Chrissie Isles, made the claim that art has now expanded the notion of drawing to include all kinds of other things (“practices”). Some instances of performance art, she said, should be considered drawing — the notion being that the movement of bodies can be said to inscribe invisible lines across the time and space of the art event.

I found myself demurring, even though this inclusiveness was generously intended — among other things, it brought several of our digital artworks into the fold. Since these works take our old notion of hand-drawn space as a point of departure and actively engage not only the idea but also the responsive line of drawing, they can indeed seem to be a new form of drawing. In fact, nothing could please at least part of me more.

But to expand a definition is often to blur it, smudging crucial distinctions and differences. At such a point, it’s usually a good move to return to particulars to see what is really going on behind the generalization. Within our body of work, Loops is the purest (and most radical) example of a work that verges on drawing, so we can begin by comparing it to a canonical work of traditional drawing — say (to choose the very best) a Leonardo notebook page. 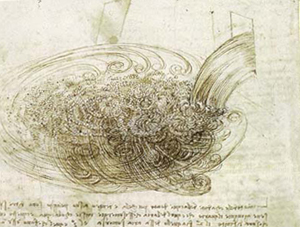 So what are the attributes of this Leonardo?

First, it comes about through the solitary and private act of the artist.

Second, it’s an active attempt to arrive at a better understanding of its subject — with the effort of that attempt not hidden away, but rather with the mind’s rapid movements and decisions left bare (for example, an initial sketch is frequently redrawn from different perspectives or simply abandoned mid-picture once its conclusion has been glimpsed).

Third, the notebook page is unique, with every mark bearing the unrepeatable character of Leonardo’s hand on that exact occasion.

And, finally, while the original act of drawing unfolded in time, the resulting page is now fixed and unchanging. Time does hover over it, in a fashion, for the page gives us a sense of the original motion of Leonardo’s hand and mind, but this is at best a vague and tenuous awareness (it is certainly the case that the motions of our eyes in their saccades over the drawing don’t track those of his hand in sketching it).

Now to consider Loops in the same order of attributes:

Solitary and private act? — It’s neither of these, for it’s a layered series of divergent acts by a number of different actors: the underlying movement is that of Merce Cunningham performing a dance he has never set on any other dancer; the parameters for the visual patterns and decisions are made in collaboration by all three artists in our group; and the ultimate imagery is generated by a virtual intelligence operating autonomously within the given parameters.

Mind’s active attempt at understanding? — Yes, but again not one mind, or even one kind of mind, but several, in the order listed above. The most unusual aspect of this is the last “mind” in the sequence, if it can be considered such; in any case, the effort of the computer in its work of interpretation is made fully visible.

Unique? — No and yes: no, in that the underlying code may be duplicated exactly at any time (and not just in theory but in practice, since we’ve released it as open source); yes, in that no playback of the code is ever the same, so that what you glimpse on the screen now you will never see again.

Fixed and unchanging? — No, as indicated in the point above. Though one further thing to note is that while the present code for the work is fixed in its current version, it is open to revision and complete reinvention (a liberty we ourselves have taken three times and which anyone else is allowed to do freely).

So is Loops a form of drawing? A complicated rather than a simple question, which you may decide on your own.

(I notice now that I never expanded upon the thought noted down at the outset of this post, but if you follow its direction it will lead to the reason why one would even bother simulating a hand-drawn line in code).

It is often said of Edward Tufte that his major books do for graphics what Strunk and White’s The Elements of Style did for writing.

Quite right. These admirable books both stress clarity of presentation above all. A good thing, often, but —

But in the same way that Strunk and White’s rules for writing seemingly disbar the psychological and syntactical complexities of, say, Henry James or Marcel Proust, so too do Tufte’s prescriptions rule out a whole class of the most challenging, difficult, and subtle visualizations.

The root of the problem may be found here, at the start of Tufte’s book Beautiful Evidence, where he approvingly quotes typographer Eric Gill: > > If you look after truth and goodness, beauty looks after herself.

Assumed here is this: an intrinsic order underlies the world — and if you adhere to it closely, your design will reflect that order, with all the desired moral & aesthetic values: clarity, symmetry, simplicity, etc.

Left out by this theology is any sense of the uncertain, the contingent, and the subjective.

A simple example before a more complex one: Marc Downie points out that one of Tufte’s favorite graphic examples, the schedule, never reveals any slippage. A true timetable would show both the ideal and the likely times, with possible late departures rippling down into probable missed connections, and so on.

Instead of the clear resolute line that Tufte favors, the advanced realist would substitute a line precisely blurred by accumulating uncertainty.

An alternative to the Gill passage cited by Tufte is this one by the noted architectural engineer Ove Arup:

The idea that the correct functional, the correct structural and the best possible aesthetic solutions are one and the same thing must, I am afraid, be abandoned together with the older philosophers’ dream about the harmony and ultimate identity of truth, goodness, justice and liberty.

Speaking of clear resolute lines, it’s in depicting conspiracies that these are hardest to draw — or rather hardest to justify drawing — since it’s in the very nature of the subject that relations are uncertain, exchanges veiled, chronologies jumbled, signs equivocal, identities falsified, appearances camouflaged, and motives hidden.

In the latter half of the 1990s, artist Mark Lombardi became famous for his drawings of conspiracies and scandals (Iran-Contra, Whitewater, etc), these works finding their place after his suicide in prestigious museum collections. Though the result of obsessive research and a fine sense of craft, they embody perfectly all the contradictions and limitations of that clear resolute line, which illuminates less than it obscures.

His are meticulous pencil drawings, with lovely arcs and arrows between handwritten nodes, all resolving into clear and very elaborate networks — networks whose shapes are suspiciously pleasing, many of them being nicely rounded spheres that complement the over-all idea of “global conspiracy.”

Looking more closely, you see that lines linking nodes imply a relationship, but give no indication as to its kind (cause? effect? part? whole? byproduct? symptom? accident?). The links nonetheless imply a sinister web of conspiracy, yet a true sense of causality is suppressed; as indeed must follow from the complete absence of chronology (reasoning about cause and effect depends, after all, on events sequenced in time — among many other factors).